TUSCALOOSA, Ala. – Alabama put the final touches on preparations for its second scrimmage of fall camp during a two-hour morning practice inside the Hank Crisp Indoor Facility on Friday.

Friday’s helmets and shoulder pads session was the 13th in a series of 20 practices for the Crimson Tide as it prepares for its season-opening contest with Duke in the Chick-fil-A Kickoff Game at Mercedes-Benz Stadium in Atlanta, Ga. The matchup between the Crimson Tide and Blue Devils is scheduled for Saturday, Aug. 31, with a 2:30 p.m. CT kickoff on ABC.

The Crimson Tide will move over to Bryant-Denny Stadium on Saturday for closed scrimmage that is slated to begin at 1 p.m. CT. Alabama will be off Sunday following the scrimmage and will return to the practice field on Monday, Aug. 20.

MEDIA ADVISORY: Media wishing to attend the viewing period prior to Saturday’s scrimmage should meet at Gate 3 at Bryant-Denny Stadium at 12:15 p.m. Head coach Nick Saban will address the media immediately following the scrimmage in the media room at roughly 3:15 p.m. 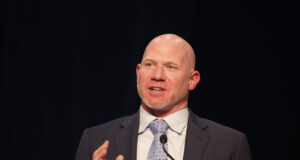