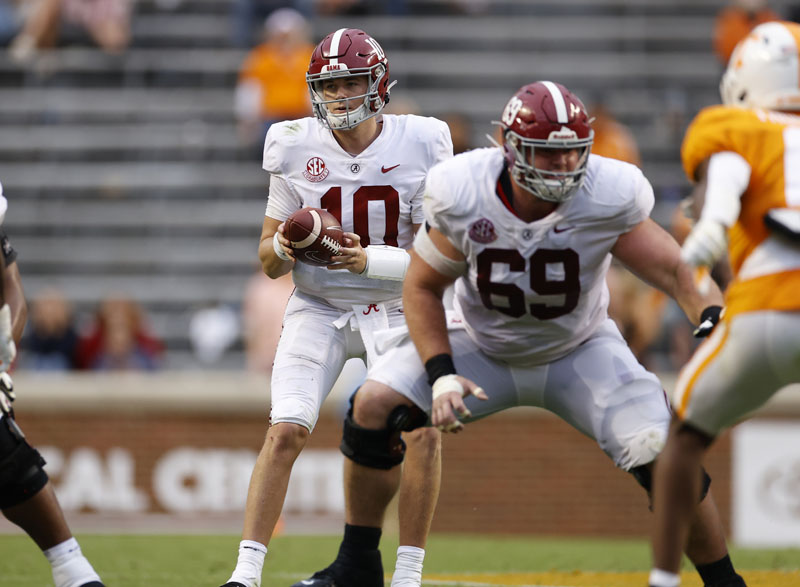 FIRST TIME STARTERS: The Crimson Tide had two student-athletes make their first career starts in today’s game as wide receiver Slade Bolden and punter Charlie Scott each got the nod against Tennessee. The duo earned the start one week removed from DeMarcco Hellams making his starting debut against Georgia. Prior to the matchup with the Bulldogs, John Metchie III and Christopher Allen each got the start against Ole Miss on Oct. 10. Alabama began the season with a collection of seven players who got their first career start at Missouri on Sept. 26. The group of starters in Columbia was comprised of two on offense, three on defense and two specialists. Getting the nod on offense were offensive lineman Emil Ekiyor Jr. and tight end Carl Tucker. The first-time starters on defense included linebacker Will  Anderson Jr. along with defensive backs Malachi Moore and Daniel Wright. Rounding out the group on special teams were placekicker Chase Allen and punter Sam Johnson.

SABAN VS. FORMER ASSISTANTS: Today’s game with Tennessee marked the 23rd meeting and fourth this season between Crimson Tide head coach Nick Saban and one of his former assistants. Saban is 23-0 all-time against his former staffers during his tenure at Alabama. The matchup with the Vols closed out a four-week stretch for Saban against his former assistants, a streak that started with a 52-24 win over Jimbo Fisher and Texas A&M on Oct. 3 and was followed by an 63-48 win over Lane Kiffin at Ole Miss a week later. Most recently, Saban defeated Kirby Smart and then-No. 3/3 Georgia, 41-24, at Bryant-Denny Stadium last weekend. His most wins against a former assistant is four, which have come against Jimbo Fisher (Florida State, 2017; Texas A&M 2018-20). With the win today, Saban now has three against Jeremy Pruitt.

UNRANKED, NO PROBLEM UNDER SABAN: With its 48-17 win over Tennessee today, Alabama has defeated 94 consecutive unranked teams under head coach Nick Saban, the longest streak in FBS history. The current streak began with a win over Colorado on December 30, 2007 in the Independence Bowl. The previous record was 72 games, shared by Miami (Fla.) (1984-95) and Florida (1989-2000). Over the 94-game stretch, only Ohio State has single-digit losses to unranked opponents with nine. Under Saban, Alabama holds a 98-3 (.970) (94-3, .969 after vacations) mark against unranked opponents.

OCTOBER DOMINANCE UNDER SABAN: Alabama head coach Nick Saban has been dominant in the month of October during his time in Tuscaloosa. Saban has compiled a 48-2 (.960) mark with the only two losses coming on the road during that time. His first loss came in 2010 at South Carolina with the only other loss being a 2014 loss at Ole Miss. For his career, Saban is 75-17 (.815) including a 3-1 mark at Toledo, a 12-8 record at Michigan State and a 12-6 stretch at LSU in addition to his time with the Crimson Tide.

NON-OFFENSIVE TOUCHDOWNS IN THE SABAN ERA: Malachi Moore’s 28-yard fumble recovery for a score in today’s matchup with Tennessee marked Alabama’s 77th non-offensive touchdown of the Nick Saban era and the second in 2020.

FUMBLE RECOVERY FOR A SCORE: Malachi Moore forced a fumble and recovered the ball to take it 28 yards for a touchdown. The fumble recovery for a score was Alabama’s first since the Tennessee matchup last season on Oct. 19 when Trevon Diggs picked up a fumble at the goal line and returned it 100-plus yards for a Crimson Tide touchdown.

TURNOVERS, TURNOVERS, TURNOVERS: Alabama recorded a fumble recovery on the opening drive of the second half. With the scoop and score, the Crimson Tide has forced at least one turnover in 71 of its last 77 contests dating back to the start of the 2015 season. During the current run, the Crimson Tide has forced 128 turnovers (84 interceptions, 44 fumbles) and returned 27 of those miscues for touchdowns.

MOORE TURNOVERS: Malachi Moore has forced a turnover in three of his first five collegiate games. The freshman is responsible for three of Alabama’s eight turnovers so far this season.

35-OR-MORE IN 18 STRAIGHT: The Crimson Tide scored 48 points in this afternoon’s matchup with Tennessee. That total marked the 18th straight game that Alabama’s offense has scored 35-or-more points, which is the longest streak in major-college football history. Oregon scored at least 35 points in 15 consecutive games from Nov. 5, 2011 through a Nov. 17, 2012 loss to Stanford by a score of 17-14. Alabama’s last game of not posting 35-or-more points came in the Tide’s 44-16 loss to Clemson in the College Football Playoff National Championship Game on Jan. 7, 2019.

500+ YARDS OF TOTAL OFFENSE: Alabama recorded 587 yards of total offense against Tennessee in today’s game, marking the 37th time in the last 77 games, dating to the start of the 2015 season, that the Crimson Tide has eclipsed the 500-yard mark. In 2018, UA totaled 500 or more yards in 12 of 15 games to set a single-season record. The Tide followed that up by eclipsing 500 yards of offense in nine of the 13 games of the 2019 campaign. Alabama has gone over the 500-yard marker in four of the five games so far this season.

SCORING STREAK CONTINUES: Alabama extended its school record for consecutive games with a score to 260 thanks to Najee Harris’ one-yard rush across the goal line to close out the Tide’s second offensive series of the day in Knoxville. The Crimson Tide was last held off the scoreboard in a 9-0 loss to Auburn on Nov. 18, 2000. Entering today’s game, Alabama has a 201-55 (.785) record over the course of the current streak.

SMITH REWRITING ALABAMA RECORD BOOKS: Wide receiver DeVonta Smith has now totaled 163 catches for 2,665 yards and 27 touchdowns. With his 163 receptions, he now ranks fifth in career receptions in the Alabama record books. His 2,665 career yards also puts him at No. 5 on the Tide’s career receiving yards list.

12 IN A ROW WITH A TD FOR NAJEE: With Najee Harris’ one-yard rushing score in the first quarter of today’s contest in Tennessee, the senior has notched a rushing touchdown in 12 straight games dating back to the Oct. 19 matchup with Tennessee last season. Over the 12-game streak, Harris has accumulated 26 rushing touchdowns and two-or-more scores in eight of those games. Harris has totaled 1,368 yards and 26 touchdowns on 238 carries during that stretch. He has also totaled 14 rushing touchdowns this season, a new Alabama program record for rushing scores through the first five games of a season.

HARRIS MOVING UP THE CHARTS: After carrying 20 times for 96 yards, Harris has totaled 2,972 rushing yards and 34 touchdowns for his career. Those numbers include 783 yards and four scores as a sophomore to go with 370 yards and three touchdowns as a freshman, in addition to his junior totals. Alabama’s all-time leader for career rushing yards is Derrick Henry with 3,591 from 2013-15 while the career rushing touchdowns leader is split between Mark Ingram (2008-10) and Henry at 42. 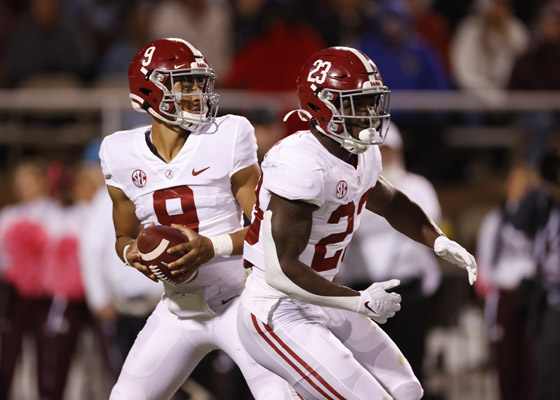 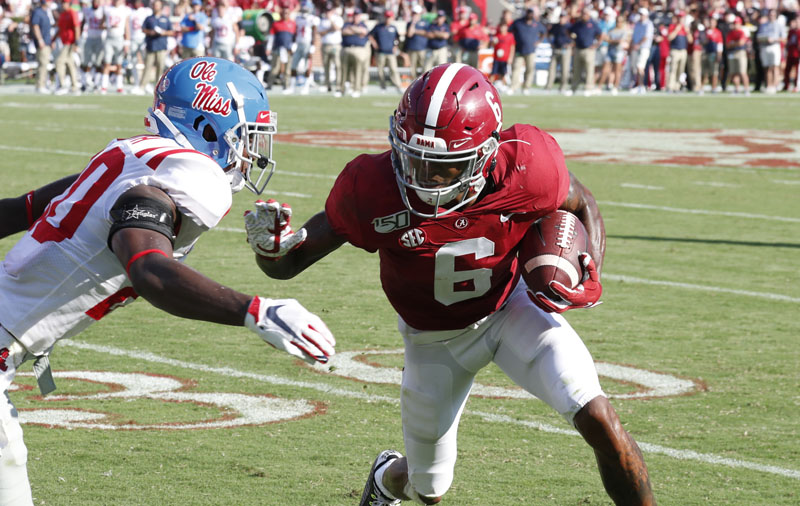 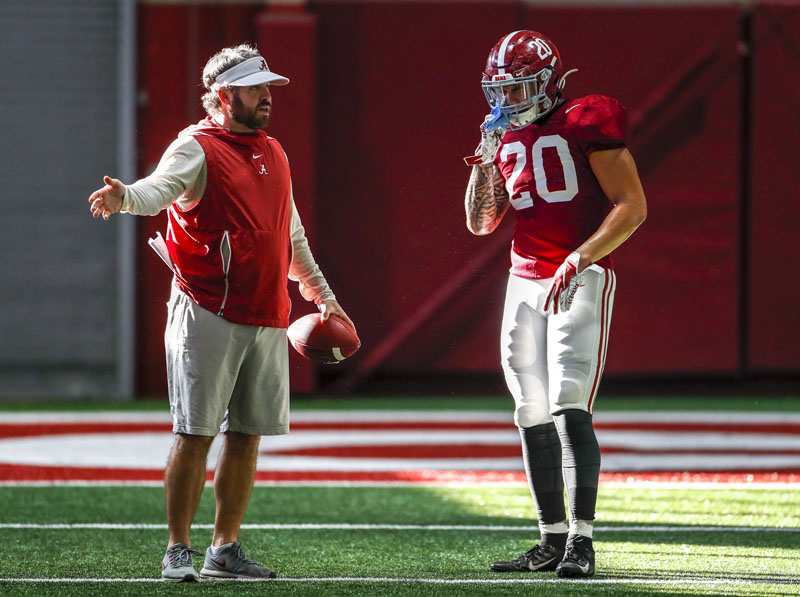 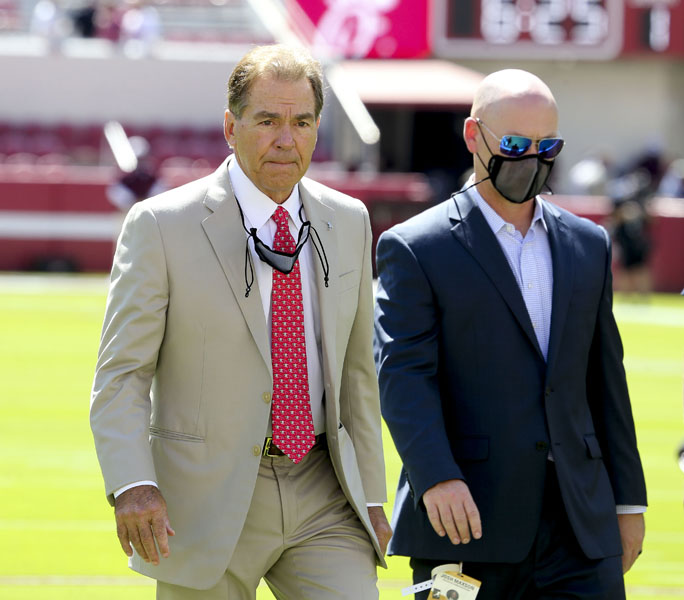